Building Games For Cross-Game Items Is Hard. So Why Do It?

Building new assets around other games' NFTs is extra labor, but there's more than one way to skin an avatar.

While true ownership and resellability are things gaming NFT enthusiasts have talked about for a while, there’s one big benefit that doesn’t get similar exposure.

For gamers who only care about what new gameplay and storytelling experiences a tech can provide, this is the key. What’ll make them “get it.”

I personally think this will be the lightswitch moment for many – when they realize cross-game items are a reality and NFTs can be interpreted as anything.

It’s why when we sent a press release about MyMetaverse minting the first playable NFTs on Efinity, outlets like CoinTelegraph instead went with headlines and tweets like this:

The milestone here was Efinity integration -- these cross-game items had been live for months at that point. But for this journalist, the penny had finally dropped: Cross-game items are a real thing.

To be fair, any genuinely new idea needs to be heard multiple times. And then questioned. And then scoffed at. First they ignore you, then they laugh at you, then they bid 5 ETH on your virtual pendant.

As we’ve covered, cross-game NFTs don’t involve importing 3D models from one game to another. That method is a web2 metaverse initiative joined by companies like Meta, Pixar, and Microsoft.

The web3 way necessarily uses basic key/value pairs and other data small enough to store on-chain. Plugging into another game’s assets is like reading an API, and building your interpretation of that in your world.

Which prompts probably the most common question among those trying to understand: “Doesn’t that mean recreating every item in every new game? Isn’t that labor-intensive?”

They’re completely right. In order for this to work, developers need to build the new interpretations of these entities into their game, based on key/value pairs and other data in the user’s NFT.

There are levels to this (something we’ll cover in a future post), but the effort involved here ranges wildly. At the low-effort end is a wallet check and mere recognition that an NFT exists, after which you hand the player a resource or crafting essence. Not too difficult.

At the other end is a genuine port, building new 3D models in a way that fits your world not only aesthetically, but with your economy, combat, and other systems. You’ll have to answer questions like “What does +10 strength mean in my world?”

It can also mean reading an item’s history, giving small nods to past achievements, and fleshing out dialogue trees from prior, cross-game choices.

The next obvious question is, of course…

Why Would Devs Spend All This Effort Including Other Games’ Data?

Anyone familiar with marketing knows the sales funnel. Many dollars are spent just getting potential customers in the funnel. In a world where attention is at a premium, several impressions are needed - each attached to a cost - before brand awareness is achieved.

The end goal varies from a purchase, to a download, to a first microtransaction, to clicking on an ad. But they all look something like the below image:

Potential customers move down through the funnel, so the story goes, gently nudged by all of the marketer's carefully placed ads and targeted social media blasts. It's hard to find a more optimized version of this than mobile games, so we'll talk about one of their exemplars: Game of War.

The formula was later recreated with Mariah Carey. But after the ads stopped? Player acquisition plummeted. Game of War went from a high water mark of $95 million per month to just $3 million – a 97% decrease.

Game of War was a prime example of user acquisition dialysis, all funnel and no fun, monetized to within an inch of its life, and squeezing that last inch like a roll of toothpaste.

But if you walked into the Game of War marketing room and told them there was a way to get users halfway down the funnel without allocating $40M USD for a Kate Upton campaign, they’d be very, very interested.

Users, too, would perk up. If someone told me the ludicrous amount of time I had spent in WoW or CSGO actually meant something in their game, I’d log in just to check it out. From the perspective of the marketers, that already puts me towards the bottom of the sales funnel.

Some more “modern” versions of the sales funnel extend the model downwards, into a widening cone that represents how much the customer will evangelize the product after using it. They’ve passed the decision point, bought the product, and now they identify with it, sing its praises, and in the context of a metaverse, start creating their own content, and their own value in the system.

Marketers will always pull their hair out over search terms, click-through-rates, and conversion rates. This doesn't change that. But this is another tool, arguably more effective, that skips most of the funnel.

The only catch is you spend the effort much earlier in development – far before you start promoting the game, for greater benefit down the line.

That may involve a reallocation of budget, too. Technically this is a marketing exercise, but since it’s development that can begin very early, it could be lumped into dev costs. Much of this in the real world has thus far been casual comarketing among indies, but it’d be interesting to see what this could achieve with Kate Upton money.

I’ve talked to every kind of indie developer. There are those who make every decision based on market analytics and optimized funnels (yes, even in the indie space). The above section is for them. It’s all about player acquisition.

Then, there are the others. Those who flesh out experimental ideas with no thought of reward, who are almost physically allergic to capitalism. The ones eating dinner at their monitors to keep exploring an idea, often getting nowhere, rarely capturing lightning in a bottle, but always, always honing the craft.

Think of Alexey Pajitnov on the streets of Moscow, handing out floppy disks for free. He knew there was no way to profit from Tetris in a pre-glasnost Soviet Union, but he also knew he had created something unique, and he just wanted to share it.

That’s who this section is for. Those who just think it’s neat.

The “neat” part here is artistically building on previous worlds, and contributing to the wider space of open IP.

What does that look like? It could be creating your own worlds, or extending those which already exist. It could be making tools for others, or increasing accessibility, or criticism and curation. It could mean adding a missing piece to an otherwise great universe, or solving a problem, or tying up a loose narrative thread.

It’s a phenomenon we haven’t seen much of, but the closest parallel I can think of is SCP Foundation – a series of stories about memory-sucking monsters, which anyone can contribute to.

Within the Wild West of indie experimentation, devs often play loose with their IP. It’s unlikely we’ll see cagey corporations like Disney or Activision playing with “open IP,” but as far as the indie space goes, policies will range from extremely tight to “do whatever you want.”

More openness will lead to more interoperability, which in turn leads to each asset being more valuable. That’s not just monetary value, by the way – that’s sentimental value. Storytelling value. Artistic value.

As more of this IP is created and built on itself, the benefits will be exponential. A glut of open IP content could lead to connected industries of curation, aggregation, and criticism will spring up. The cream of the content will rise to the top, and become known as canon, while the poorer quality scribbles will be forgotten.

Standards Will Show the Way

Making new assets is hard. Making assets from other projects fit your world is really hard. But there’s one aspect of this workflow that’ll make things easier as time goes on.

That is a suite of standards that covers:

Standards are a big enough topic for another blog post on another day, as are the different levels of interoperability that devs can opt for. Watch this space on the Enjin blog for those articles soon.

For now, hopefully we’ve illuminated why it’s not just possible, but beneficial for developers to spend the effort to recognise NFTs from other projects.

There’s a strong two-way marketing incentive here. Instantly getting other players interested in your project, and possibly vice versa (if the other team uses your NFTs as well). Everyone wins there – the value of the asset is increased by virtue of being recognized in more venues.

More importantly, there’s the possibility of genuinely new kinds of stories being told, and new cross-game designs. That should be the lightswitch moment for many gamers and developers. How often do they get to seed the new fields of an undiscovered genre?

We’re yet to see the Carmack & Romero of the cross-game asset space, but they will emerge.

Will it be you? 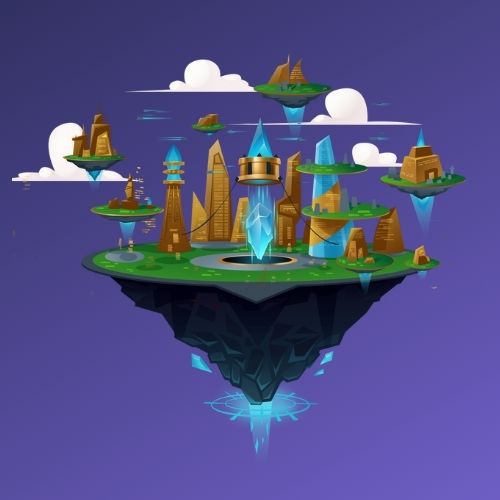 Want to know more?
The web3 way is actually easier than what web2 metaverse companies are cooking up. Find out more here.
Learn more.
Thank you! Please check your email.
Oops! Something went wrong while submitting the form.
#
Metaverse
#
NFTs